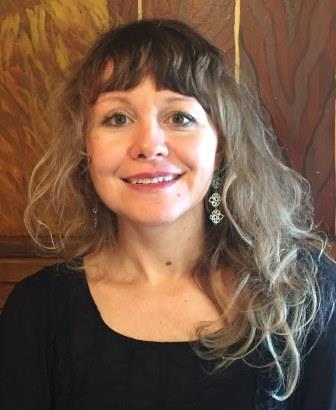 We last talked with author Christine Sneed back in early 2011 shortly after she published her first short story collection Portraits of A Few of the People I’ve Made Cry.  Already the winner of the Grace Paley Prize in Short Fiction, her stunning debut became a magnet for literary awards and was eventually named a finalist for the LA Times’ Book Prize for First Fiction.  But Sneed was just getting started.  In the years that followed, the NU writing teacher has published two critically-acclaimed novels – Little Known Facts (2013) and Paris, He Said (2015), graced the cover of the NY Times Book Review, and continued to collect writing honors including the Carl Sandburg 21st Century Award and a Booklist nod for a Top Ten Debut Novel.  This Saturday, April 9th, you can hear Sneed read selections from her recent work when she visits EPL’s 1st Floor Community Meeting Room at 4 pm along with author and comedienne Julia Sweeney.  In anticipation of her visit, we recently spoke with her via email about the life of a successful novelist, her forthcoming story collection The Virginity of Famous Men, the resurgence of short fiction, and her favorite recent reads.

END_OF_DOCUMENT_TOKEN_TO_BE_REPLACED

Five years ago Evanston poet Joshua Corey began to experience an unusual sensation.  After publishing three celebrated poetry collections, the Lake Forest College professor suddenly felt the “uncharacteristic itch to write some prose.”  Readers everywhere should be thankful he scratched that itch because the result was Corey’s fantastic first novel Beautiful Soul: An American Elegy.  Described as “an impressive postmodern noir debut,” Beautiful Soul “centers around Ruth, a bored and frustrated young mother in the Chicago suburbs haunted by the letters she receives from her own mother, who has been dead for several years.”  On Thursday, October 2nd, you can hear Mr. Corey read from Beautiful Soul when he visits EPL’s 1st Floor Community Meeting Room at 7 p.m. along with local authors Patrick Creevy and Dennis Byrne.  In anticipation of his visit, we recently spoke with him via email about the evolution of Beautiful Soul, poetry vs. prose, mother-daughter relationships, hardboiled detective novels, and his latest John Ashbery-approved poetry collection.

END_OF_DOCUMENT_TOKEN_TO_BE_REPLACED

I Write by Larrinita Starks

As I sit down on the bed and cut off the lights
I think about my life and begin to write
I write for the families dying on the streets
I am scared to lay down because of the gunshots in my sleep
I write because I am hurting, there are no more tears to cry
I am patiently waiting for my time to die END_OF_DOCUMENT_TOKEN_TO_BE_REPLACED

Randy Richardson is no stranger to Chicago’s literary scene.  A journalist, essayist, and the president of the Chicago Writers Association, his debut novel Lost in the Ivy was named one of 2005’s notable Chicago books by Gapers Block.  Now Richardson is back with his new novel Cheeseland, and the local lit world is buzzing again.  Favorably compared to the work of Dennis Lehane and Nicholas Sparks, Cheeseland tells the tragicomic coming-of-age story of Lance Parker and Daniel McAllister, two Southside teens who embark on a Wisconsin road trip to mend their fractured friendship.  A 2011 Evie Fiction Finalist, Cheeseland has been described by author Christine Sneed as an unforgettable page-turner that “reminds us that adolescence can be a land of thrilling self-discovery and of serious danger.”  On Thursday, January 24th, you can hear Mr. Richardson read from Cheeseland when he visits EPL’s 1st Floor Community Meeting Room at 6:30 p.m. along with local authors Gail Lukasik and Jerry Jaffe.  In anticipation of his visit, we recently spoke with him via email about his real-life inspirations for the book, the destructive nature of secrets, what’s new at CWA, and his favorite reads from 2012.

END_OF_DOCUMENT_TOKEN_TO_BE_REPLACED

When John Huston was eight years old he wanted to be Indiana Jones, and minus the snakes and booby traps, he’s living that boyhood dream.  In 2009 – after years as an Outward Bound wilderness instructor and major expeditions to Greenland and Antarctica – the Evanston adventurer reached the pinnacle of polar exploration with a historic Arctic journey he chronicles in his new book Forward: The First American Unsupported Expedition to the North Pole.  Illustrated with breathtaking photos and interwoven with the rich history of polar travel, Forward puts you right alongside Huston and his expedition teammate Tyler Fish as they guide their 300-pound loads over the unforgiving surface of the frozen Arctic ocean on a 55-day adventure that pushed them to the limits of human endurance.  On Thursday, May 31st, you can meet Mr. Huston when he visits EPL’s 1st Floor Community Meeting Room at 7 p.m. for a multimedia presentation that includes readings from Forward, a display of expedition gear, and a discussion of the lessons he learned in leadership, teamwork, and perseverance while conquering the North Pole.  In anticipation of his visit, we recently spoke with him via email about his love for the wintery North, his 7000 calorie daily diet, the differences between Chicago and Arctic cold, and his upcoming expedition to Ellesmere Island in the Canadian Arctic.

END_OF_DOCUMENT_TOKEN_TO_BE_REPLACED

Suzanne Clores has good reason to celebrate.  A Chicago-based writer and editor who has taught at both DePaul and Northwestern Universities, she recently marked the ten-year publication anniversary of her book Memoirs of a Spiritual Outsider with its Kindle-edition release.  In Spiritual Outsider, Clores undertakes an enlightening exploration of Wicca, Shamanism, Yoga, Vodou, Sufism, and Buddhism on her quest to fill a spiritual void left by her Catholic upbringing.  Written with honesty and heart, Spiritual Outsider is one women’s openminded search for a deeper, more meaningful life.  On Sunday, March 13th, you can hear Ms. Clores read from Spiritual Outsider as well as a new work-in-progress when she visits EPL’s 1st Floor Community Meeting Room at 2 p.m. along with fellow local authors Pamela Ferdinand and Cristine Sneed.  In anticipation of her visit, we recently spoke with her via email about Spiritual Outsider’s anniversary, her continued spiritual journey, and her upcoming novel The Greatest of Ease.  END_OF_DOCUMENT_TOKEN_TO_BE_REPLACED

Christine Sneed is a local author clearly hitting her stride.  This past November the DePaul University professor published her debut short story collection Portraits of A Few of the People I’ve Made Cry to glowing reviews after first claiming the 2009 Grace Paley Prize in Short Fiction.  Praised by Booklist as “an exceptionally smart” collection written with a “supple mix of wit, frankness, and compassion,” Portraits features ten provocative stories that explore the complexities of romantic love and fame and was recently named a finalist for the 2010 LA Times’ Art Seidenbaum Award for First Fiction.  On Sunday, March 13th, you can hear Ms. Sneed read from Portraits when she visits EPL’s 1st Floor Community Meeting Room at 2 p.m. along with fellow local authors Pamela Ferdinand and Suzanne Clores.  In anticipation of her visit, we recently spoke with her via email about the positive response to Portraits, the nature of celebrity, the state of short fiction, and her work on both a novel and new story collection.   END_OF_DOCUMENT_TOKEN_TO_BE_REPLACED

Pamela Ferdinand is an award-winning journalist who covered breaking news for The Boston Globe, Miami Herald, and Washington Post for over a decade.  She is a former adjunct journalism professor at Boston University, has written on wide-ranging topics for The Economist and National Geographic News, and most recently, co-authored the empowering memoir Three Wishes: A True Story of Good Friends, Crushing Heartbreak, and Astonishing Luck on Our Way to Love and Motherhood.  Picked as a “Tome of the Brave” by Oprah’s O Magazine, Three Wishes is the candid, braided story of how Ferdinand and friends Carey Goldberg and Beth Jones sought their dreams of motherhood with the help of eight shared vials of donor sperm rather than waiting for Prince Charming to arrive.  With the talisman of Donor 8282, the trio soon found unexpected luck and love while navigating the compromises and complications inherent in becoming mothers.  On Sunday, March 13th, you can hear Ms. Ferdinand read from Three Wishes when she visits EPL’s 1st Floor Community Meeting Room at 2 p.m. along with fellow local authors Christine Sneed and Suzanne Clores.  In anticipation of her visit, we recently spoke with her via email about appearing on the Today show, the realities of motherhood, her enduring friendship with Goldberg and Jones, and Three Wishes going to Hollywood .