Off the Shelf has a new location!

Visit us at our new home on Evanston Public Library’s redesigned website for author interviews, EPL’s Best Reads, Poetry 365, Local Art @ EPL, and much, much more. 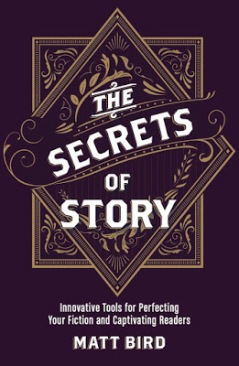 Attention all Chicagoland writers!  Don’t miss Evanston author Matt Bird when he visits EPL this Thursday at 7 pm to discuss his invaluable new book The Secrets of Story: Innovative Tools for Perfecting Your Fiction and Captivating Readers.  Described as “a certifiable writing-craft genius” by Arthur A. Levine Books editor Cheryl Klein, Bird holds an MFA in screenwriting from Columbia University and writes the popular blog Cockeyed Caravan.  In The Secrets of Story, he offers comprehensive, audience-focused strategies for becoming a master novelist, storyteller, or screenwriter using innovative tools such as his Ultimate Story Checklist.  Bird will take questions following his presentation, and copies of The Secrets of Story will be available to purchase courtesy of Bookends & Beginnings.  Reserve your seat today! 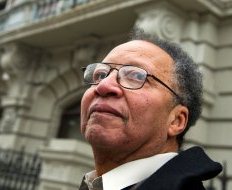 Walter Dean Myers died on Tuesday at the age of 76 after a brief illness.  Author of more than 100 books including Monster and Lockdown, Myers was a three-time National Book Award nominee, the recipient of two Newbery Honors, a five-time winner of the Coretta Scott King Award, and “the rare author to have a wide following among middle-school boys.”  In 2011, EPL’s Jarrett Dapier talked with Myers for In These Times magazine.  In the fascinating interview, the legendary YA writer candidly discussed “the debt he owes to James Baldwin” along with the importance of mentoring teens.  He will truly be missed.

Evanston’s very own Next Theatre Company isn’t afraid to challenge its audience.  For nearly 35 years the company has remained committed to producing “socially provocative, artistically adventurous work,” and this season’s staging of Rinne Groff’s Compulsion stays true to that mission.  Based on the true story of Meyer Levin and his obsession with Anne Frank’s diary, the complex tale explores the fictional Sid Silver’s passionate fixation on Anne’s story as he attempts to honor her legacy.  You can catch Compulsion through November 17th at the Noyes Cultural Arts Center, and EPL cardholders can purchase 2-for-1 tickets using the promotional code FRANK.  We recently spoke via email with Next’s artistic director Jenny Avery about Compulsion’s critical reception, the history behind the play, puppetry, and the company’s future plans.

END_OF_DOCUMENT_TOKEN_TO_BE_REPLACED

In the continuing NPR series, Keys To The Whole World: American Public Libraries, Neda Ulaby reported on the dire financial circumstances many libraries find themselves in. In Vermont, for instance, which touts itself as the state with the most libraries per capita, some are teeny, one-room operations, open only in summer for a couple of hours a day, and are completely volunteer-run (reminding me of how the Mightly Twig here in Evanston operated for a few years until the CAMS branch opened). “No paid librarians,” one volunteer in Ludlow, VT points out. “We function on donations, book sales, bake sales ….” Ulaby continues her report with examples of how libraries in various states get funded. The range is broad: some are funded through city or state budgets, some rely on legacies and donations only, some have a mix of sources. Almost all are suffering in today’s economy.

s available to borrowers. Lynn Neary, of NPR’s Morning Edition, prefaced her report, the second in a series of the state of libraries in the U. S., this way, “E-books have changed the world of publishing in fundamental ways. The business model that encouraged publishers to support the work of public libraries has changed to such an extent that this relationship has been stressed to the point of non cooperation.”

Listen to the full story (pay special note the lively conversation that ensues in the comments section).

Today on NPR’s Morning Edition, Susan Stamberg offered the first in a series on the history and state of public libraries in the U.S. with this story on Andrew Carnegie, the man who is responsible for promoting the public library concept and providing millions to fund a system of 1,689 public libraries across the country starting in 1903 with the $300,000 he donated for the Carnegie Library in Washington, D.C. It was one of the first public buildings, beautifully designed in the beaux arts style, and was especially noteworthy in that it was open to all– women and children and all races (an unusually progressive policy for the time).

Evanston, too, benefited from Carnegie’s largesse. Our library (pictured at right) was built with a $50,000 grant on the corner of Orrington and Church Street in 1907. Read more about the history of our library here.

Today’s Chicago Tribune featured a story in the Health & Family section on how much moms love libraries. Reporter Ted Gregory cited the not surprising results of the Pew Research Center’s Internet and American Life Project study: “Mothers are outliers in their enthusiasm for libraries and their use of libraries for their own purposes, like visiting the library, checking out books, using library websites and connecting to libraries with mobile devices.” The research confirms the anecdotal knowledge that many hold to be true, but its real import is in it’s role in assuring continuing support for struggling institutions like public libraries as they weather the budget cuts and threats to funding of the current economy. When asked to comment on her love of the library, Maryanne Szweda, mother of four home-school kids in Aurora said, “It’s the best thing you can have for a community.” Read the full article here. 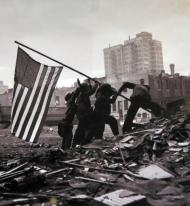 icago Tribune ran a feature article in the A&E section on the wonderful collection of books and other historical materials held in the Pritzker Military Library. Rivaling the best libraries at U. S. military bases around the globe, the Pritzker also mounts special exhibitions, offers docent-led tours, and has a speaker series popular with the general public. Two current exhibits are “She’s a WOW: Women’s Service Organizations in World War II,” and a collection of propaganda posters from World War I, featuring such iconic images as Uncle Sam, the Doughboy, the Spirit of Columbia and Chandler Christy’s famous “Christy Girl” in a sailor’s suit, declaring “Gee, I Wish I Were a Man. I’d Join the Navy.” The library is located in Chicago at 104 S. Michigan Ave. For more information visit their website.

In the photo above, four Chicago boys reenact Joe Rosenthal’s iconic image of the flag raising at Iwo Jima. Photo gift of John Zukowsky, on display at the Pritzker Military Library in Chicago.

We are thrilled to introduce poet Bruce Guernsey as the judge for our 35th Annual Jo-Anne Hirshfield Memorial Poetry Awards.  A professor of English at Eastern Illinois University for 25 years, Guernsey was a Fulbright Senior Lecturer in American Poetry in Portugal and Greece, spent four years as poet-in-residence at Virginia Wesleyan College and also served as editor of The Spoon River Poetry Review.  His books of poetry include From Rain: Poems, 1970-2010 and New England Primer, and his poems have appeared in Poetry, The Atlantic, and American Scholar.  To learn more about Mr. Guernsey and his work, make sure to visit his website, and mark your calendars because the deadline for contest entries is Friday, March 8, 2013.  In the meantime, enjoy one of Mr. Guernsey’s poems below: