Suzanne Clores has good reason to celebrate.  A Chicago-based writer and editor who has taught at both DePaul and Northwestern Universities, she recently marked the ten-year publication anniversary of her book Memoirs of a Spiritual Outsider with its Kindle-edition release.  In Spiritual Outsider, Clores undertakes an enlightening exploration of Wicca, Shamanism, Yoga, Vodou, Sufism, and Buddhism on her quest to fill a spiritual void left by her Catholic upbringing.  Written with honesty and heart, Spiritual Outsider is one women’s openminded search for a deeper, more meaningful life.  On Sunday, March 13th, you can hear Ms. Clores read from Spiritual Outsider as well as a new work-in-progress when she visits EPL’s 1st Floor Community Meeting Room at 2 p.m. along with fellow local authors Pamela Ferdinand and Cristine Sneed.  In anticipation of her visit, we recently spoke with her via email about Spiritual Outsider’s anniversary, her continued spiritual journey, and her upcoming novel The Greatest of Ease.

Evanston Public Library:  With Memoirs of a Spiritual Outsider recently turning ten-years-old, can you reflect on your experiences writing the book?  What were some of the biggest challenges?  Looking back, is there anything you wish you would have done differently when you were exploring Wicca, Vodou, Sufism, and the other religious and spiritual traditions?

Suzanne Clores:  I think every writer experiences both delight and horror when looking back on a book they wrote ten years previously.  In my case, delight comes from the pure, vulnerable pursuit of sacredness my narrator carries into the exploration of each spiritual path.  I remember the excitement and curiosity that drove me to research the book, to participate in different ceremonies and find mentors who trusted me with their stories of connecting to spirit.  I still feel excitement when I read certain excerpts; scenes of hope and risk all mingled together.  At the same, and this is where the horror comes in, the narrator is terribly pained, fearful, and mistrustful of getting too close to spiritual life.  These dark feelings are a natural part of the spiritual quest process, I know now, but that insight would have been nice to have during the writing process. 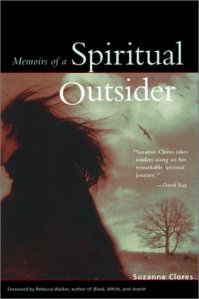 EPL:  In the “Revelations” section that concludes Spiritual Outsider, you wrote that throughout your spiritual journey you “clung to the conventional wisdom that spirituality, like religion, is a deeply personal, private matter that shouldn’t be discussed openly,” and you wondered, “Why wasn’t I brave enough to discuss my exploration, to share the fruits of my journey with friends and family?”  How did you eventually find the courage to write Spiritual Outsider?  What motivated you to share what at first you considered a private matter?

SC:  My intent was always to write Spiritual Outsider so people could read it, not so I could talk about it.  Talking about it while undergoing the research diluted the very sacredness I sought.  Once, during a Sunday visit with family, I shared the fact that I had attended a Wiccan ceremony.  It was as if I had casually mentioned I had finally completed construction on my space ship. Too many questions followed, which of course was a normal reaction, but I found it laborious to transmit my enthusiasm so early on in such a raw process.  No one wants to have to explain or justify their passion outside the proper medium.  Writing is my medium.  Though I craved more immediate connection with friends and family over my spiritual explorations, I ultimately knew the connection would come from the reader.  And it has.

SC:  There’s always a part of me that, on a daily basis, feels “outside” of any real intimate relationship with people, culture, or faith.  Outsiderness, like any character trait, is both a strength and a liability.  Feeling separate is common among writers, artists, and other members of subculture.  One school of thought says this is an issue simply solved by manipulation of brain chemistry.  Another, posted in a review on my website, positions my narrator in Spiritual Outsider beside Colin Wilson’s discussion of alienated literary figures like Camus and Herman Hesse in his 1956 work “The Outsider.”  The Outsider part of me, like Wilson’s Outsider, seeks and finds freedom from life as usual, but at the same time suffers from alienation.  It sounds more romantic than it is.  I’ve found value and insight from occupying that position, but at the end of the day, I don’t want to feel like two people.  Yoga and meditation help a lot to minimize that dichotomy.  Or at least, to minimize the effects of the dichotomy.

EPL:  After Spiritual Outsider, you wrote and edited another book titled The Wisdom of Saints that was published in 2002.  Can you tell us more about it?  How did that project come to be?

SC:  After Spiritual Outsider I had a strong desire to leave writing about religion, spirituality and memoir behind.  I immersed myself in fiction in an MFA program at the University of Arizona, but I had only been there a few months before 9/11 devastated New York.  An editor friend asked that I edit this small book about saints for the post 9/11 readership, hoping it would remind readers of the world’s goodness throughout the ages.  I very much enjoyed the research into Saints lives–not just Catholic saints but mystics, poets and leaders from many faiths.  It has influenced my fiction and other pieces I’ve written since.

EPL:  Word is out that you’re currently working on a novel titled The Greatest of Ease.  Can you give us an idea about what to expect?  How is work on a novel different from writing a memoir?  Do you have any other writing projects in the works?

SC:  The Greatest of Ease is my homage to New York, where my family has lived and worked in the arts for four generations.  The novel hinges on three characters caught in an unusual friendship: a young performance artist, an older female Warhol-esque entertainment maven, and an aging alcoholic bar owner.  I think of it as a tour through the gritty and glorious New York underworld, which is as full of gems as it is rats.  I’ve found writing fiction equally absorbing as writing memoir.  Each genre has its own conventions and rules to break, and I use each genre to ask the reader to participate in the story differently.  I’m writing a few short memoir pieces now–both about the fine line between fantasy and reality–and those are very probing, questioning stories about the relationship between writer and subject.  When I write fiction, my hope is that the reader own the subjects and the relationships within, almost as if the story belonged to them.

EPL:  When you visit EPL on March 13th, you’ll be reading along with authors Christine Sneed and Pamela Ferdinand.  How did you become acquainted with these two local writers?  How do you see your respective works relating to one another?

SC:  I’m thrilled to be reading with both women.  Christine was a colleague from when I taught at DePaul, and I’ve always been in awe of her sharp wit and unyeilding energy level.  I think it was only two years ago that she casually mentioned finishing a novel that in her words, “didn’t work.”  And she’s already out with a terrific new collection of stories.  Pamela I know only by association, but have heard great things about her book.  I can’t really say how our works relate to each other.  I suspect they all represent a certain type of female narrator coming-of-age in various phases of life.

EPL:  Though this isn’t the official season for book lists, can you share any good titles you’ve read lately?  Better yet, what was the one book you read in the past year that meant the most to you regardless of the year it was published?

SC:  The book that absolutely won my heart is Patti Smith’s Just Kids.  I fantasized about joining the whole Warhol/Velvet Underground movement when I was a college student, and by the time I moved to New York in 1991, I could only grasp at the post punk, poetry, and music world coattails she describes so beautifully, and which she actually built.  On a completely different note, I found a copy of Hemingway’s The Old Man and the Sea lying around in a Los Angeles hotel room and was surprisingly moved.  Books I’m looking forward to are Jane Gardam’s Old Filth and Jennifer Egan’s A Visit From the Goon Squad.